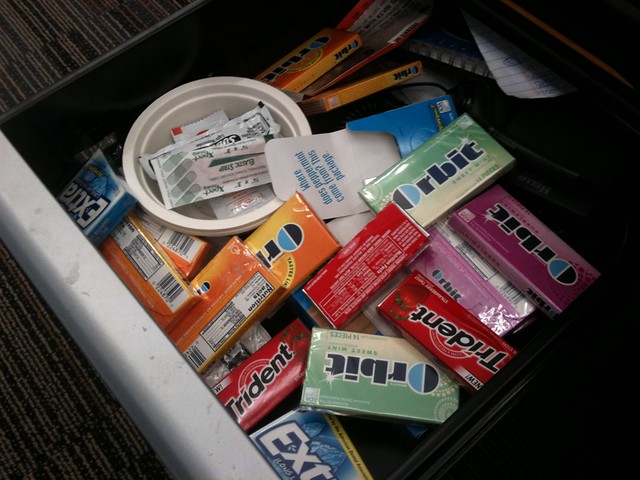 CC Image Gum by I am R. at Flickr

Our goal was to create a dialogue-based film with ADR. As the screenwriter, I had to show the beginning middle and end, writing for rhythm, modifying the script, visual story stucture of tone, and beats that end in therefore and but.

I want to create a shot-reverse-shot film using dialogue, the visual story structure of tone, and beats that end in THEREFORE or BUT to raise tension. I will know I successfully met my goal if I write a screenplay that makes me proud and follows the requirements. I do think this goal is achievable if I work hard and put in maximum effort. I am setting this goal because I want to learn how different roles work within film. The deadline is February 21st and I think we can do it if we split it into pre-production, production, and post-production.

Leader(s) in the Field / Exemplary Work(s)

Aaron Sorkin is a fantastic screenwriter with a one of a kind style. He uses techniques such as overlapping dialogue, misunderstanding, hiccups, and many others. This stands out from other screenwriters due to his style.

The (FILM, SOUND, or GAME Creation)

The following cannot be shown in the video:

Ways of Thinking: To make a screenplay for our story. I wrote the story with input from our group and additional changes myself. To make the film interesting and engaging, I had to use different beats and techniques. However, we had a little amount of time to make this film, this made me rush and I had to spend a lot of time on the screenplay.

Ways of Working: Throughout this project, my team members and I had to talk to each other in order to get tasks done. In pre-production, we all were on separate teams to learn more about our rolls. In production, we finally sat down together and decided on a specific topic. In post-production, we all sat around Leonel while he put together the film, ADR, and the music. Also, my role was the scrum master which means I led meetings of what we were going to do for the day. The deadline was close but I made it.

Tools for Working: For this film, I used different videos for research and for inspiration. During pre-production, I researched my role through talented screenwriters. For the screenplay, the tool used was Celtx.

Ways of Living in the World (Life & Career)

Ways of Living in the World: During session five, other than working on the production project I had presentations, tests, and homework. I played soccer with my friends to prepare for the upcoming soccer season. I continued to watch videos and TV shows to keep me occupied.

When post-production ended we had to present our film in front of the class and the advisory committee. Brian Favorite wrote, “Lowball’ and scam was great! Excellent documentation! I love the music choice,” This feedback helped me learn what was produced well and what was not as good.

In our final version of the film, it had multiple principles from the SUCCESs model. The film was a very simple concept while telling a story inspired by a drug deal. The film was also unexpected because it was much different than you would expect. The film is also emotional because it is a journey that goes from no gum to being scammed.

What I Learned and Problems I Solved

From the session five production project, I learned what it takes to be a screenwriter. Before this project, I had never written a screenplay. Throughout production, we encountered a lack of time which resulted in a weaker film. To fix this problem we worked hard to get it done. I had to keep the team focused and on track for the deadline.